13th January, 2014 Archiving, Casualty Lists, Latest News, Libraries, National Archives, New Records, Pilot Records, War Records, World War Two Records Casualty Lists , Military Lists , Military Records , Pilot Records , RAF Records , The National Archives , World War Two Records
According to the latest news from The National Archives website, a collection of Second World War RAF casualty records has now been released to view. The records were produced by the Air Ministry's casualty branch following the loss of an aircraft or personnel. They include accident reports and correspondence with next of kin. Known as the AIR 81 series, the first tranche  contains 316 packs dating from the beginning of the war in September 1939 to May 1940. However, many of the files contain correspondence which runs into the 1950s and even the 1960s. This first collection of records does include some notable RAF raids from the early years of World War 2, such as the raid on the Albert Canal Bridges in Belgium in May 1940 when five aircraft from RAF No 12 Squadron were lost and the first Victoria Crosses of the war were awarded. There's more details at http://www.nationalarchives.gov.uk/news/903.htm
View all 10 comments

05th December, 2013 Casualty Lists, Latest News, New Records, TheGenealogist, War Records Engineer Roll Of Honour Records , Engineer War Records , First World War Records , Institute Of Electrical Engineers , Military Records
TheGenealogist has just released a new set of data records from The Institute of Electrical Engineers (The IEE) war memorial records from the First World War. The IEE war records are a tribute to members of their organisation who died in the Great War. A number of promising engineers lost their lives and the records give an in-depth biography into the background, education, engineering career and war service, including details on how they sadly died. Many of the records come with a picture of the member commemorated. Taken from the book 'The Roll of Honour of the Institution of Electrical Engineers 1914-1919', the records contain extensive biographies, numerous portraits and a map of North West Europe showing the main battlefields. The records are available to view in the ‘Roll of Honour’ section of the Military Records on TheGenealogist. For more information visit http://www.thegenealogist.co.uk/news.php#latest
One comment so far

06th November, 2013 Casualty Lists, Latest News, S&N Genealogy Supplies, War Records, World War One Records British Army In World War One , British Army Records , Military CDs , Military History , World War One , World War One Records
As we approach Remembrance Day and a time to contemplate the wars and conflicts of the past, it's a time when many people decide to look at the war service and records of their ancestors. The major World Wars involved so many of our ancestors that most families were touched by the events of the time. The military data CDs at S&N Genealogy Supplies are a useful research point in finding out more information about events and military history from the major conflicts. If you have an ancestor who served with the 25th Division in World War One, or if you have a general interest in military history, the new CD -'The 25th Division in France and Flanders' may be of interest. This CD looks at the operations and events of this Salisbury based Division that experienced many of the major battles of World War One. There's more information available at: http://www.genealogysupplies.com/product/World-War-1-Great-War/The-25th-Division-in-France-and-Flanders/
Leave a comment 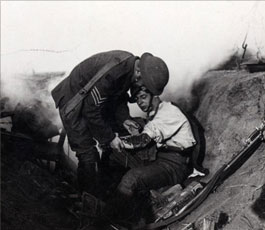