The General Register Office is a very important part of the services provided by Her Majesty’s Passport Office and I am honoured to be appointed Registrar General.

I look forward to continuing my work with colleagues in GRO on modernising the registration systems and to ensure our customers receive the best, most efficient service possible.

The GRO oversees registration services to the public, including the registration of civil marriage, civil partnerships, births, deaths, stillbirths and adoptions. It is the Registrar General’s responsibility to make the regulations that govern registrars and the registration processes. He is also required by law to create a free search index of registration records available to the public and to issue certificates on request. For more information about the Registrar General and the GRO, visit the organisation page of Her Majesty’s Passport Office. 26th August, 2015 Celebrity Trees, Family History, Family Tree, Latest News, TheGenealogist, Uncategorized, Who Do You Think You Are? Ancestor Records , Derek Jacobi's Ancestor , Derek Jacobi's Family History , Joseph De La Plaigne , PCC Wills , Perogative Court Of Canterbury , Probate , Sir Derek George Jacobi , Who Do You Think You Are? , Wills
The Sir Derek George Jacobi's story  on Who Do You Think You Are? was one of equal contrasts. Though we found out that he is from working class roots in London, with a boot maker for a grandfather, as we delved further back in time we discovered that his family are from much grander stock, one having mixed with Louis the Sun King until his religious belief had him imprisoned and he escaped to England. Sir Derek's ancestor was Joseph de la Plaigne, a financier and French Protestant from Bordeaux who had to conceal his religious beliefs from his monarch in order to remain in favour with the Catholic Louis XIV. In 1701 de la Plaigne was found out to be a Protestant and incarcerated in prison at Loches in the Loire Valley. Making his escape he, like many Huguenots, made his way to England. In 1708, at the age of 70 and living in England, Joseph de la Plaigne married Salome de la Bastide. Researchers have found that the wedding took place on the 7th August at St. Mary Magdalene, Old Fish Street, London. The couple's son, Guillaume, was born soon after this with his christening taking place on the 28th May 1709. The now elderly Joseph died not a long time later and researchers from TheGenealogist website have been able to find his will in the Prerogative Court of Canterbury Wills collection accessible on TheGenealogist where if you are a subscriber you will be able to search for images of the actual Wills that  had been lodged with the PCC for probate. In de la Plaigne's case the document shows that Joseph was born at Bordeaux and was living in the Parish of St Anne's, Westminster when he made the will. To see a copy of the will and to read TheGenealogist's full article on Sir Derek Jacobi's family history click this link. TheGenealogist website has a broad suite of resources to find ancestors in the records.

22nd August, 2015 Latest News, Uncategorized MI5 Files , The National Archives , TNA
The National Archives blog has announced the release of the latest batch of the MI5 files to view at TNA in Kew while a selection have been digitized. They write that "As always they contain a fascinating new glimpse into the murky world of Second World War and Cold War espionage and provide extraordinary insights into some of the most famous of all spies." http://blog.nationalarchives.gov.uk/blog/grandmother-us-spy-recruited-philby/
Leave a comment

17th August, 2015 Celebrity Trees, Family History, Family Tree, Jewish Records, Latest News, TheGenealogist, Uncategorized, Who Do You Think You Are? Jane Seymour , Jane Seymour's Family History , Jane Seymour's Family Story , Joyce Penelope Wilhelmina Frankenberg , London Jewish Seatholder's Records
The family story of Joyce Penelope Wilhelmina Frankenberg, known better by her stage name of Jane Seymour, is an emotional rollercoaster of a ride. Her Father’s family are Jewish while her mother was a Dutch Protestant who had endured being in a Second World War Japanese concentration camp. The television episode followed Jane as she discovered more about her two great-aunts, Michaela and Jadwiga who had experienced the horrors of Poland under Nazi occupation. TheGenealogist website, meanwhile, has discovered that Jane's paternal grandfather, Leon Frankenberg, had come to Britain after his family had fled persecution in Eastern Europe. He was the lucky one as he established his own business and became a respected member of his local synagogue community as recorded in the London Jewish Seatholder's records now searchable on TheGenealogist.   Read full article on TheGenealogist site and discover more about Jane Seymour's family history.

Did you see Paul Hollywood on Who do You Think You Are?

14th August, 2015 Celebrity Trees, Latest News, New TV Programmes, TheGenealogist, Who Do You Think You Are? 12th Series Of Who Do You Think You Are? , Paul Hollywood
Did you see the first programme in the 12th series of Who Do You Think You Are? on TV? Paul Hollywood, from The Great British Bake Off, was taken back to his grandfather's WWII experience in North Africa where his grandfather was sent as soon as he had completed his training. At Medjez el Bab in Tunisia, Norman's Light Anti-Aircraft division were protecting the infantry from enemy air attacks at the time of the major Allied offensive to take Tunis from the German forces. With the enemy throwing bombs and missiles at them it was hard on these men. From there Paul travelled to Italy, where he learnt about how his grandfather was part of the landing force that became trapped on the beaches at Anzio for four months, surrounded by Germans and all the while under constant aerial bombardment. Paul gets to see the landing area where his grandfather and the other men would have felt like sitting ducks, with death and devastation all around them. Norman and his comrades finally managed to land and their gun was then transported five miles inland. Unfortunately for them the regiment was soon surrounded by the enemy in a dangerously exposed area. Huge numbers of men had no choice but to dig themselves into 7ft long fox holes and spend months trapped, coming under repeated German shell attacks. In May 1944 and thanks to Norman's regiment's extraordinary efforts, the stalemate at Anzio was broken. The next month the Allied armies went on to liberate Rome, but not without the loss of 14,000 lives. Paul's grandfather brought back from this conflict a visible memento of his terrifying time. He had developed a facial tic that stayed with him until he died. Researching his line even further back, Paul Hollywood was seen in the Who Do You Think You Are? programme to use TheGenealogist's 'family forename search' to find Alexander McKenzie, a Wood Turner who had come down to Liverpool from his native Glasgow. Following his Scottish family line up to Glasgow he then found that the next generation in the McKenzie family was a Glasgow Policeman, down from the Highlands, who had a certain amount of trouble avoiding alcohol. Paul then discovered that his great, great, great, great grandfather Donald McKenzie, was a Highland postman with quite extraordinary stamina. Not being able to afford a horse with which to cover his rounds delivering the mail to 30,000 people, Donald simply ran the 120 miles with the mail every week. With thanks to TheGenealogist for using part of their article. Read the full piece that reveals even more about Paul Hollywood's family history by clicking this link: https://www.thegenealogist.co.uk/featuredarticles/2015/who-do-you-think-you-are/paul-hollywood-248/
Leave a comment

August Discover Your Ancestors is out

Other articles in the August 2015 edition

Bad medicine: Simon Wills looks at the medicines taken by your 19th century ancestors Scanning on the go: Nick Thorne reviews a useful tool for family historians Joining the circus: Nell Darby takes to the big top with a history of the circus, its performers and those who went along Lost to the waves: Jill Morris looks at records of deaths at sea available online History in the details: Jayne Shrimpton on sandals Regulars: News & Events / Books / Place in focus: Bradford / Classifieds
Leave a comment

Norfolk Parish and other records to go online.

TheGenealogist and the Norfolk Record Office have announced that they have signed an agreement to make Norfolk parish and other historical records available online for the first time. The registers of baptisms, marriages, burials and banns of marriage feature the majority of the parishes in Norfolk.

On release the searchable transcripts will be linked to original images of baptism, marriage and burial records from the parish registers of this East Anglian county

Famous people that can be found in these records include:

- Samuel Lincoln, the great-great-great-great-grandfather of Abraham Lincoln, 18th President of the United States of America, can be discovered in the baptismal records of St Andrew, Hingham in Norfolk for the 24th August 1622. At some point his entry has been highlighted with a star.

- Vice Admiral Horatio Lord Nelson, who lost his life at the Battle of Trafalgar. This impoverished clergyman’s son can be discovered in the register for Burnham Thorpe in 1758. There his father, as rector of the parish, would have officiated at all the baptisms that year in this church with his name appearing at the bottom of the page.

Viewing an image of the actual parish register reveals that the young Horatio Nelson was firstly baptised privately in October 1758, just a week after being born and then given a second “public baptism” in the middle of November. This practice was carried out for sickly babies who were not expected to survive and begs the question of how different British history would have been had he died as an infant. Fascinatingly, by looking at the actual image of the page there are some additions to his entry that have been penned in the margin years later. These notes, reputedly to be by his brother the Rev William Nelson, 1st Earl Nelson, celebrated the honours that his brother received in his adult life. He ends it with the latin quote “caetera enarret fama” which translates as “others recount the story”. 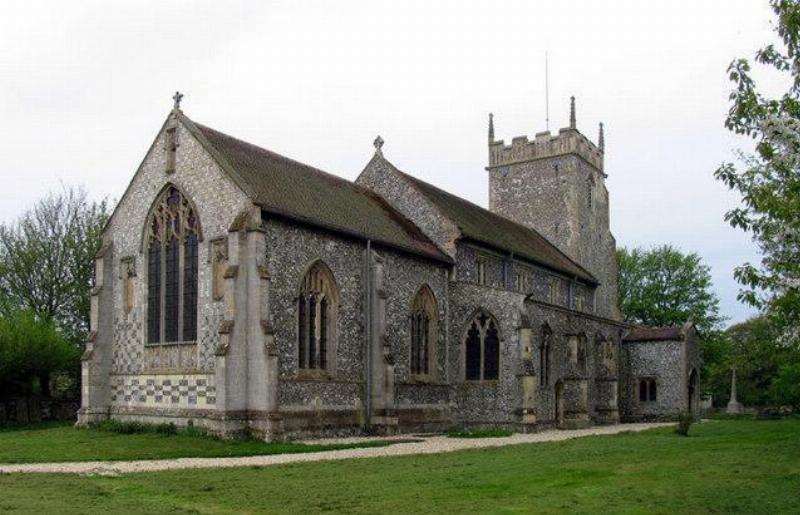 Nigel Bayley, Managing Director of TheGenealogist said: “With this collection you will be able to easily search Norfolk records online for the first time. From the results a click will allow you to view high quality digital images of the original documents. Joining our already extensive Parish Record collection on TheGenealogist, this release will be eagerly anticipated by family and local historians with links to Norfolk”