25th February, 2015 Latest News, National Archives, New Records Arts And Humanities Research Council , Humanities Research Institute (University Of Sheffield) , Immigration In Medieval England , TNA , University Of York
The National Archives has launched a new online database that reveals data of immigration in medieval England as held in their records at TNA. England’s Immigrants 1330-1550 is the outcome of a major Arts and Humanities Research Council funded research project that was undertaken by the University of York in collaboration with the Humanities Research Institute (University of Sheffield) and The National Archives. For the first time the resulting database allows researchers to search over 65,000 immigrants who were resident in England during this period by name, nationality, profession and place of residence. To find out more take a look at TNA’s blog post in which Dr Jessica Lutkin and Dr Laura Tompkins explore the database and medieval immigration in more detail. On 9 April Dr Lutkin and Dr Jonathan Mackman will also be giving a talk on the project as part of the weekly talks programme. 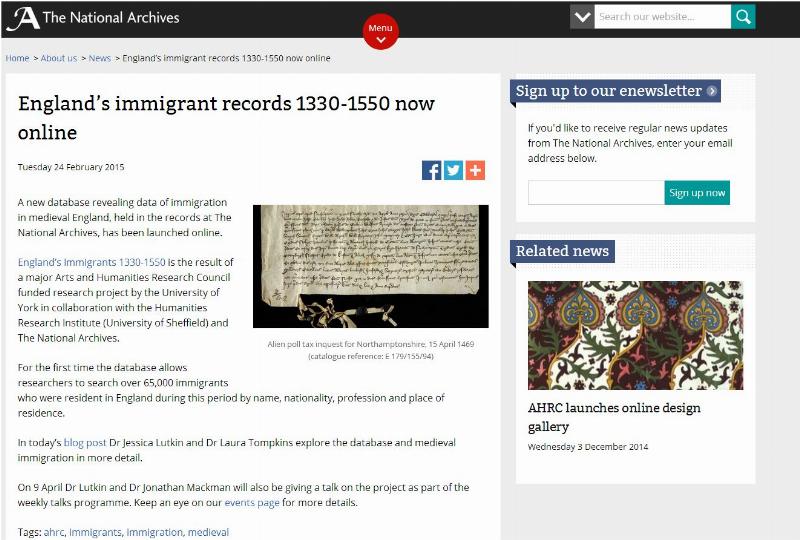 Who Do You Think you Are? Live reveals star guest

Reggie Yates, best known for his work as a BBC radio DJ and television presenter, will be at the Who Do You Think You Are? Live show at Birmingham's NEC on the opening day.
Reggie appeared on the TV programme Who Do You Think You Are? last year, in an episode which saw him travel to Ghana to trace his grandfather, Harry Philip Yates. Once there, he unravelled a complicated family history in which Ghanaian culture and British colonialism collided.
Born in London in 1983, the presenter knew very little about his father’s side of the family, after his parents separated when he was just four years old. He grew up with his mother and never met his paternal grandparents, but his Who Do Think You Are? experience made him feel more connected to both his own father and his wider family: “I feel like I’m part of something, and being here and learning about our history has made that even more real.” During his trip to Ghana, the presenter enlisted the help of historian, Carina Ray, to discover more about the men in his family including George Yates, an Englishman who came over to the Gold Coast to work in the mining industry. Reggie also met his adopted uncle, JB, and spoke to Ghanaian chief Nana about his great grandmother.
Hear Reggie's story
Reggie will be doing a Q and A session with Who Do You Think You Are? Magazine editor, Sarah Williams, to discuss the making of his episode and share his story.
"I was really honoured to take part in Who Do You Think You Are?" Reggie explains, "it was an incredible journey that I took a huge amount from and I'm really looking forward to sharing my experiences." Meet Reggie and hear first-hand about his experiences at Who Do You Think You Are? Live on Friday 16 April at the NEC! To ensure you don't miss out, book your tickets here
Leave a comment

16th February, 2015 Birth Records, Society Of Genealogists Birth , BMD Certificates , Marriage And Death Certificates In England And Wales , Society Of Genealogists , SoG
The Society of Genealogists (SoG) has welcomed the announcement that the Government has accepted an amendment to the Deregulation Bill, currently going before the House of Lords, that allows for the publication of information from Birth, Marriage and Death Certificates in England and Wales to be issued otherwise than in the form of a certified copy. This is something the SoG has long campaigned for and it has said on its website that it is grateful to Baroness Scott of Needham Market, herself an enthusiastic genealogist, who suggested to Government that this deregulation is possible.
Leave a comment 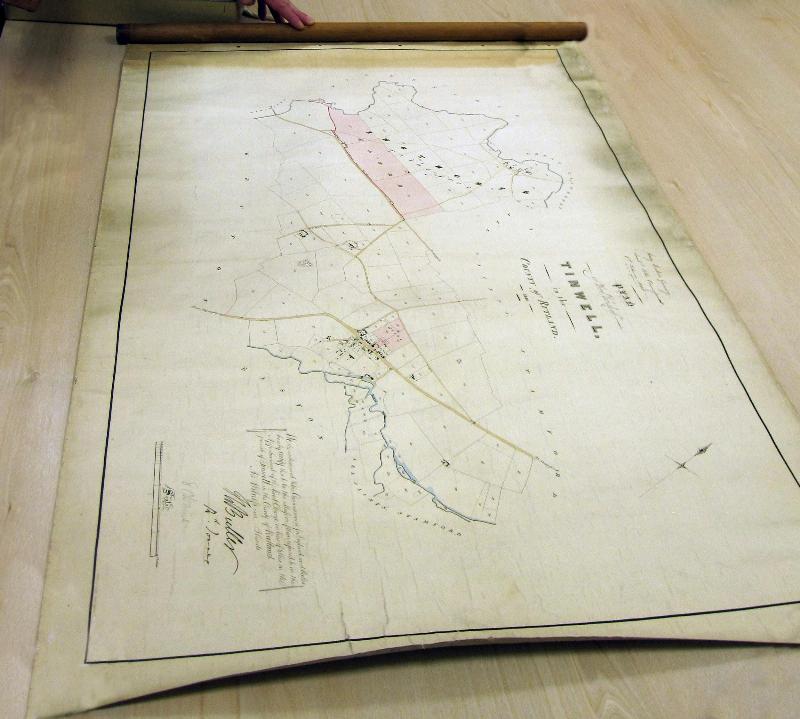 This exciting information has just been released by TheGenealogist:

All aspects of society were captured by this survey

It’s always been a challenge to find where our ancestors lived, but now these records can help you explore the fields and houses in their home villages and towns. Never before have family historians been able search nationwide for these ancestral maps. We plan to have complete coverage in the next few months.

Tithe maps allow you to pinpoint your ancestors from our records. They show the boundaries of fields, woods, roads, rivers and the location and shape of buildings. The detail recorded within the maps and apportionment records will show you how much land they owned or occupied, where exactly in the parish it was, what the land was used for and how much tithe rent there was to pay.

The Tithe Commissioners maps are now housed in The National Archives (TNA). Due to their age and the materials used the original maps are often too fragile to handle. These were microfilmed in 1982 and some of the maps have deteriorated over the last 30 years. The first stage of the project is the release of these as online images.

There are over 12,000 main maps plus thousands of update maps as the boundaries of fields changed over time.

The second stage will be the delicate conservation and digitisation of the original colour maps.

“Tithe records are a rich resource for family historians as they cover owners and occupiers of land from all strata of early Victorian society.

These maps can be three to four meters in length by several meters in width and have gone through a multiple levels of digitisation and processing so that the huge maps can load instantly, even on a mobile phone. This fantastic resource was created in the period from 1837 to the early 1850s as a result of one of the largest surveys into the usage, ownership and occupation of land in England and Wales since the Domesday book.”

Diamond subscribers to TheGenealogist are able to view apportionment records for all of England & Wales, with the accompanying maps now being live for Middlesex, Surrey, Buckinghamshire and Leicestershire. The maps for the rest of England and Wales will follow over the coming months.

See their page TheGenealogist.co.uk/Tithe to freely search the records and learn more about them.

Here is an example provided by TheGenalogist:

We can look for Sir Robert Peel in Middlesex, a county that covered some of the area we would now think of as London. By selecting Landowner Records and then from the drop down menu Tithe Records we then enter Robert Peel into the name fields.

In 1854 Sir Robert, twice Prime Minister of the country and creator of the modern police force, was the occupier of land that was owned by the Earl of Listowell in St Margaret’s, Westminster.

By clicking on the Transcription icon we can then see the names of both the owner and occupier, the date it was entered into the records and the plot number on the plan. 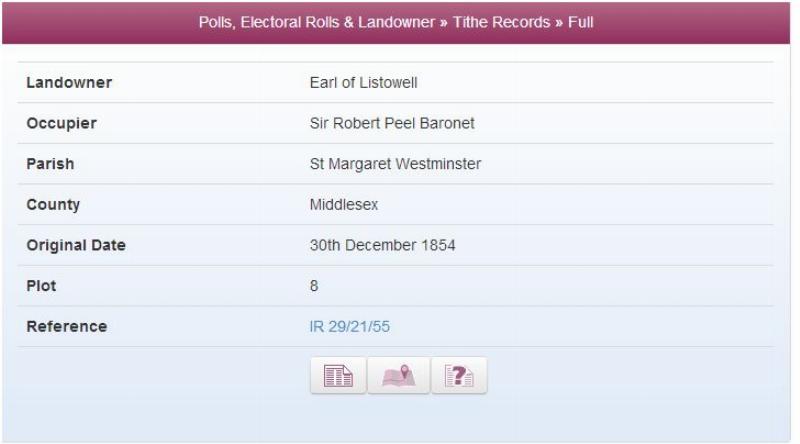 The image of the apportionment reveals that it is a house: No. 22 Princess Gate. 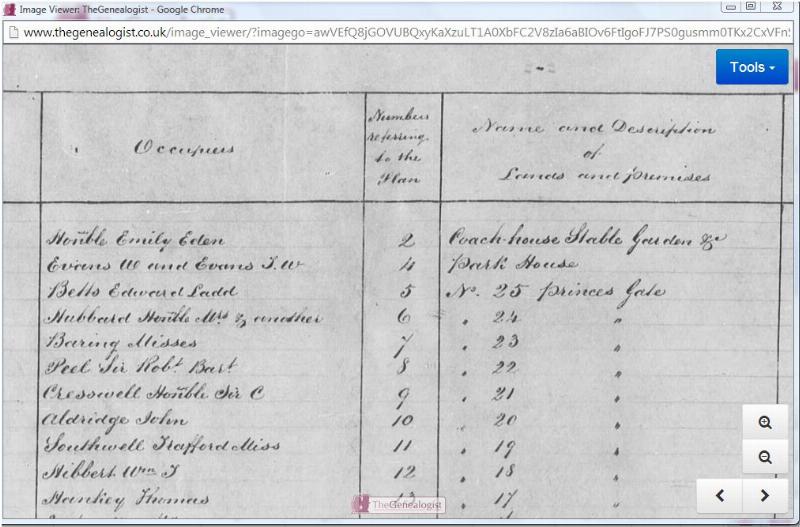 By clicking on the map icon will quickly zoom the researcher in to see the plot on the plan. You can then use the magnify buttons to move in and out to see the plots in relation to the full plan of the parish.

Tithes are a rich resource for family historians to find their ancestors within. The records and maps cover owners and occupiers of land from all strata of society in early Victorian times.

For a special offer of £20 off TheGenealogist Diamond Subscription go to:

09th February, 2015 Latest News, Libraries Kent History And Library Centre , Lincoln Cathedral , Magna Carta , Salisbury Cathedral , The British Library
A 1300 edition of the Magna Carta has been found buried in Kent's archives.  This news comes hot on the heals after four copies of the 1215 document , two from The British Library and one each from Salisbury Cathedral and Lincoln Cathedral were brought together for a short exhibition at the British Library. The new discovery of the historic document, which established the principle of the rule of law, was found at the Kent History and Library Centre in Maidstone. The charter has been authenticated by Professor Nicholas Vincent, of the University of East Anglia, who  has confirmed it belongs to Sandwich town council. The document  was ripped with about a third of it missing, but it is still thought to be worth up to £10m according to the Professor. A spokesman for Kent County Council said the parchment was found at the James Whatman Way site by community historian, Dr Mark Bateson. Dr Bateson was looking in the archives for the Charter of Forest, at the request of Prof Vincent, when he spotted the Magna Carta. The town of Sandwich have said they will use it to encourage tourism rather than sell it.

A copy of one of the British Library's Magna Carta

04th February, 2015 Genealogy Magazines, Handy Tips Convicts , History In Detail , Old Phone Books , Social History , Transportation
The latest edition of Discover Your Ancestors, the online family history magazine, is out and it makes for some  very interesting reading. Articles this month include: The sweet smell of history: Jayne Shrimpton sniffs out the interesting social history of perfume A rogue in the records: Gill Hoffs on a convict who made his fortune in the goldfields of Australia, only to lose it again The Mulberry madam: Another convict transportation story Found in the muniments room: Melvyn Jones highlights more treasures in the archives of our great landed estates All good sports: Keith Gregson explores what can be learned about amateur sporting ancestors in online records Plying the waters: Waterborne trade in Somerset explored Calling your ancestors: Jill Morris looks at old phone books History in the details: Jayne Shrimpton on raincoats Regulars: news + events / Books / Place in focus: York / Classifieds 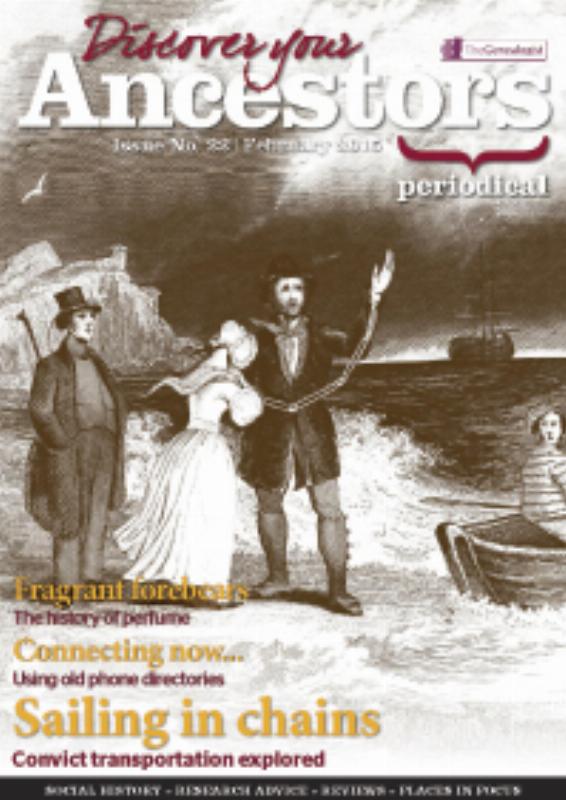 Check out: http://www.discoveryourancestors.co.uk/
Leave a comment
Found 6 Results.
Back to top